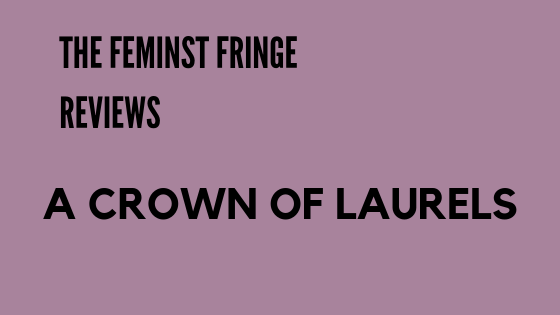 A beautiful blend of history and the here and now, A Crown of Laurels, tells a modern adaption of the well-known classical story of Daphne and Apollo where Daphne transforms into a Laurel tree to escape the unwanted sexual advances of Apollo. Wanton Theatre Company’s version of this story follows Daphne, a young girl on a night out with her sisters, who has to deal with the unwanted question of “how’s life?”, the beginning of a romantic encounter and then the trauma of sexual assault.

The narrative has been explicitly written; spoken word, live music, singing and movement all interwoven to create an incandescent performance. The use of the Orchestra as unspoken characters throughout the play adds an interesting dynamic, creating the atmosphere of a crowd, without losing the focus on the two key characters pivotal to the plotline.

With an incredibly talented performance from Stephanie Herron and Miles Hurley, the fundamental rape culture theme is evident from very early on. There is an unmistakeable obviousness of what is going to become of Daphne, yet the play remains engaging and entertaining despite the predicted outcome. Herron’s performance of Daphne is confident and powerful, she successfully creates a relationship between herself and the audience allowing us to feel her emotions and understand her vulnerabilities. At points she disengages from the rest of the play and speaks directly to the audience, as if she’s pressed pause on a TV remote, jumped out the screen and is telling us the hidden information you normally wouldn’t receive. Her vulnerabilities are laid bare for the audience to see.

Likewise, Hurley’s performance of Olly is successful in creating a distrust between the audience and his intentions with Daphne. He plays the role convincingly using that same conversational speech with the audience, visibly conveying his character’s toxic masculinity and projecting his internal fantasies of “wanting” Daphne despite her unawareness. He then seamlessly switches to the enticingly personable “nice guy” that she falls for and the audience is left in the painful position of watching the subsequent plot unfold.

Following a puncturing finish to the narrative Herron delivers a sobering message to us all. With the sombre, raw atmosphere set you are exposed to the countless examples in art history where male artists have been crowned with laurel wreaths as symbols of their success, despite personal acts or artistic portrayals of sexual assault on women. A Crown of Laurels is a moving and meaningful piece of theatre, laying the bare the harsh realities of how sexual assault has built the foundations of the art world that we know today and challenging us to think about the impact it has on women in society.