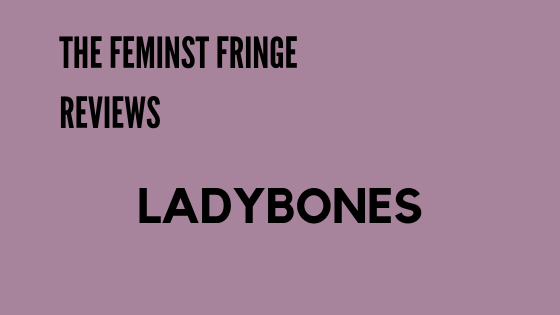 Mental health and the difficulties of being “a weirdo” intersect with the perils of being a woman in Sorcha McCaffrey’s original and riveting theatre piece, Ladybones. We follow Nuala, an archaeologist, as she unearths a skeleton and goes on a journey to discover more about the bones and herself.

The narrative is equal parts poignant, amusing and inclusive. The play is immersive and audience members are asked before it begins if they would be willing to participate. Due to the complexity and accurate portrayal of the main character’s experience of living with obsessive compulsive disorder (OCD), the audience involvement is enthralling and moving. McCaffrey checks in with her conscripted cast members and it entirely adds to the depth of the personal account she is portraying. Without dropping the weight of any of the topics that she covers, she manages to weave into the tale mental health (and its absence), disability, queer experience, virginity, and the odd scathing quip about the patriarchy.

From the staging to the videography, lighting and sound design, the play draws in the audience in a way that is both enjoyable and at times also heart wrenching as we are drawn into Nuala’s plight. Despite the quirky dungarees and the inner monologues where she can intellectually engage with her actions, her OCD grips her and draws her into a deeply painful journey. The videography, lighting and sound are effectively used to contribute to the storytelling at these stages in the tale.

However, the importance of this play is that it also takes the audience on a journey back to recovery; from the difficulty of asking for help, to engaging with the personal relationships which not only help break down the stigma and myths around OCD, but also are vital to paving a path back to recovery. The play has paired with OCD UK (ocduk.org) and you are provided with resources at the end of the play to further breakdown myths and engage with the charity, which has personally affected McCaffrey.

The entire audience left with something to say about the play – all of which was positive. Given the variety of people in the audience it was a credit to the genuine nature of the play that it had touched each of them uniquely. The element of participation gives a responsibility for the story over to the audience which I think increases the messages it promotes: about seeking help for mental health, about the othering of being a woman, and the inclusive elements it engages with surrounding disability. (This even extended to a short script for the audience participant that was dyslexia-friendly.) Ladybones is thorough and provocative – highly recommended to all.