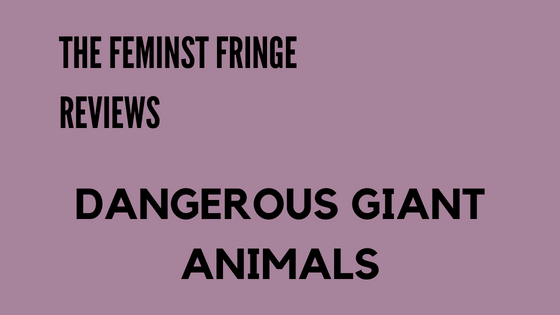 I’m not really sure how to start this review. It’s not like me to be left lost for words, but that’s exactly what happened at the end of Dangerous Giant Animals.

Christina Murdock’s Fringe debut is not to be missed. This one-woman show is a brilliant exploration of the societal treatment of disability. The emotions are palpable and Murdock’s connection to the story – based on her own family’s experiences – makes this performance all the more intriguing.

This play may have been an exercise in unpacking her complex relationship with her family members – particularly her sister with disabilities – but it’s an integral part of a wider conversation that has gone unheard for so long. The struggles that go on behind closed doors need to be shared and communities need to be forged between those in similar situations to Murdock’s family because the loneliness of it all is so stark in this show. After all, she’s on the stage alone the entire time.

The physicality of the production is a brilliant addition to the tensions which Murdock plays with expertly – building an ever larger feeling of discomfort and conflict in her audience as to whether we should look away – but we’re transfixed by her beautiful storytelling. You cannot ignore the discomfort, nor the guilt you have for it sitting in your stomach, as Murdock details the experience of carers; a story so rarely told outside news reports and government statistics. It’s something of a universal experience for those who have shared in it, and for onlookers it’s fascinating in its unfamiliarity.

While her musicality and energy on stage are enchanting, it’s undeniable that Murdock’s most striking talent is her ability to tell the stories of so many people by herself. Much like her own experiences holding the family together as a child and trying to give her sister a voice in the only ways she knew how, this play captures the gamut of emotions that the family experience regularly – stress, detachment, joy, panic, love, fear, pride. It’s an emotionally strenuous hour – and leaves you in awe of those whose lives are built around such extremes.

The technical aspects of the play are spot on, too. The lighting, sound and set are so cleverly pieced together to string separate snippets of a family’s life that the general public are rarely exposed to. And while these scenes that play out before us are often confronting, they are always a beautiful showcasing of sisterly love and personal growth and accomplishment regardless of – and often because of – the chaos of the family home.

Dangerous Giant Animals was truly stunning to have been a part of – and in the close proximity of the Cowgate theatre space, there was no denying that Murdock had woven us into her play. It was a privilege to hear this story, learn from it and tell everyone I know to go and see it. You won’t regret it.